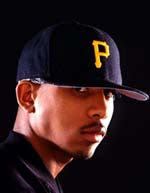 But ... not so fast.
Rap star Shyne, convicted of a club shooting while mentor P. Diddy beat the rap, was released from prison Tuesday and taken into custody by immigration officials.
The 30-year-old ex-protégé has a green card but is facing deportation to his native Belize because of his felony rap sheet, his lawyer said.
Shyne was on the verge of superstardom when he was arrested in 1999 for a shooting at Club New York.
Diddy, partying with then-gal pal Jennifer Lopez, was also charged but acquitted at trial. His young star got 10 years on assault and weapons charges.
Diddy's publicist had no comment on Shyne's legal woes Tuesday, but the mogul recently told Hot 97 that he spoke with Shyne in prison.
"He sounded like he was in good spirits," Diddy said.
"I know he can't wait to get home. I know he is definitely going to heat the whole scene up. He was definitely one of the talented young artists that I had the pleasure to work with."
Shyne was dropped from Diddy's Bad Boy Records in 2003. A year later, the inmate blasted his former patron, claiming he betrayed him.
In an interview with Vibe, Shyne said Diddy convinced a friend to lie on the stand and say he pulled out his gun and opened fire in the Times Square club without provocation.
"As my homeboy, how you gonna put somebody on the stand whose lie could put me behind bars for 25 years?" said Shyne, who claimed he shot in self-defense.
Although he still had years left on his sentence, Def Jam signed him to a $3 million contract in 2004. It released an album, "Godfather...Buried Alive," containing material recorded before the arrest, but it tanked.
Recently, Jay-Z denied a report that he had visited Shyne at the Woodbourne Correctional Facility to sign him to a record deal.
The performer's lawyer, Oscar Michelen, said his client "is anxious to get released."
"He is looking forward to seeing his family and being able to be free to do what he wants to do," he said.
U.S. Immigration and Customs Enforcement spokesman Mike Gilhooly would only say that Shyne was in custody for being in violation of U.S. immigration law."
Shyne's real name was Jamal Barrow until he changed it to Moses Leviy in recognition of his Jewish mother. His father is now the prime minister of Belize.
Read more: http://www.nydailynews.com/gossip/2009/10/07/2009-10-07_rapper_shyne_jailed_in_diddy_and_jennifer_lopez_club_shooting_incident_free_and_.html#ixzz0TGCig5OK

Posted by Aspiring Aries at 5:34 PM